Believe it or not one of the greatest river of the world – Mekong – is dry. It does not happen very often. There are many theories how it could happen – the most widespread is that the Chinese blocked the dam and only little amount of water flow into the downstream river.

No matter what the reason is, it destroyed our plans of going with a slow boat on Mekong from the Thai-Lao border to the beutiful city of Luang Prabang. The bus option did not seem appealing to us because it was not nearly as romantic as going through the serpents of Mekong and the Lao roads had very bad reputation. Nevertheless, we decided to go by bus and bought a package including 2-day bus trip, dinner and one-night accomodation. It proved out to have its up- and down-sides, but lets start from the begining.

First, we took a mini-van from Chiang Mai to a town located at Lao border called Chiang Khong. We shared the bus with a guy from London Roger, who plays a very important role in our story, a middle-aged Canadian, a teenager from Holland, a couple from Switzerland heading for rock climbing in Vang Vieng and three english girls whom we already knew from our trekking trip. 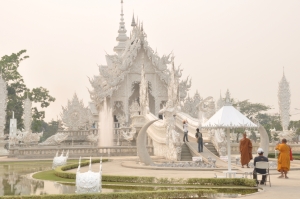 During the 4 hours long drive to Chiang Khong, we stopped at White Temple in Chiang Rai ( Wat Rong Khun). It is a very unconventional conterporary temple made completely in white. The temple is still under construction, but it is already very impressive. The paintings inside the temple feature scenes from Matrix, Star Wars and other sci-fi motives. 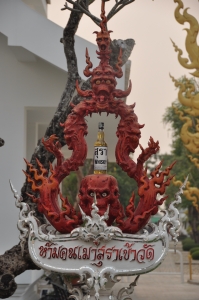 When we arrived at Chiang Khong we filled in the Lao visa application and paid 100 baht to a lady, who was supposed to take care of our visas. We ate dinner and talked to our travel mates. We were interested if it is necessary to take Malaria pills in Laos. Some people said that in Laos in contrast to Thailand there is a danger of getting malaria from mosquito bite. Most of the people took some pills but complained about the side effects, the most common being aweful nightmares. Since we were not going to travel in rural areas we decided not to take any antimalarial drugs, but we had some Malarone in our first-aid kit as an emergency medication.

After dinner we went for a walk along Mekong. Since Chiang Khong is a small village there is not much to see, so we had shakes and went back to our room.

On the next day we crossed Mekong with a small ferry. We got our passports back from the visa-lady, but we had still to apply for our visas – she did suprisingly little for the money we gave her. Another suprise waited for ous at the border. A Lao guide told us that we were supposed to take local bus to Luang Prabang, which takes 14 hours to reach the destination not 9 as we were told. Moreover, the morning bus was already full and we had to wait 3 hours for the next one. All in all we would not arrive at Luang Prabang in the evening, but early in the morning on the next day.

There was an alternative option: if we paid 200 baht each we could get a mini-van which would take as to Luang Prabang in 9 hours. It raised the costs of our trip to almost 2000 baht, but everyone agreed to pay it.

After a short while, we all had our visas and we got on a small mini-van. The road to Luang Prabang offered nice scenery: first it we went along the Mekong valley and then up to the hills, where it made thousands of curve.Unfortunately my stomach was protesting very badly with each curve. To make it worse, the road was very bumpy. There were intervals where the ride was quite smooth, but they were interleaved with periods of rodeo style ride. The further we went, the worse the road became. At times it was only a dirt road hardly to be recognised in the clouds of dust left by passing cars. 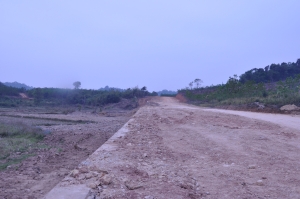 The slow ride towards Luang Prabang left us plenty of time to watch the Lao countryside. The scenery was much different from what we saw in Thailand. Most of the houses were made from bamboo or wood and they did not seem to contain modern facilities. The people inhabitting them differed much from Thais both in the facial characteristics and clothing. The landscape was dominated by hills, but the views were hidden behind thick smoke produced by the numerous fires in the woods normal for the dry season. We stopped twice to eat in villages, but the food we were served in a sort of motorway restaurant was rather raw and expensive.

The trip to Luang Prabang proved to take longer than expected – altogether it took 12 hours instead of promised 9 hours. We tried to kill the time by watching the first season of “how I met your mother” on my ipod and we almost saw all of the episodes.

As a result of the delay we arrived at Luang Prabang at midnight. We still did not have any accommodation booked and at this time it would be hard to find anything in a foreign city. Our driver did not know the city either and wanted to drop us somewhere at the outskirts. Fortunately enough, one of our travel mates Roger, knew a lady who owned a guest house and gave her phone call. Quickly she came on her motor bike and led the driver to her place. The rooms were full already so she offered us a tent in the garden. After 2-day trip we hoped for something better, but better this than nothing.

We had Lao beer and talked with other guests about the highlights of Luang Prabang, after which we went to long-awaited sleep.