Finally, we got to Luang Prabang – a town located on a small penisula in the serpents of Mekong river which in spite of western influences managed to conserve its colonial-age character. We did not know much about this place, but now we could explore it on our own.

When we woke up some of our travel-mates were already having breakfeast. Quickly, we brushed our teeth, left our loundry, packed our bags and joined the rest. Once we sat at the table we were offered strong Lao coffee, which was far better than coffee we drank in Thailand. From a menu which was clearly oriented at European tastes we chose Shakschuka, which is actually an Israeli dish made from eggs, tomatoes, onions and something which tasted like mushrooms, but was probably bamboo. The dish was delicious, but the best of all was a grilled baguette accompanying the dish. Baguette are uncommon in Thailand, but because Laos used to be a French colony, there are quite popular in Luang Prabang. We really missed a piece of bread in Thailand, where every dish consists of rice, and the crispy baguette was much more than we hoped for. 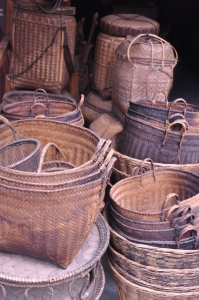 Other guests of the guest house recommended us things to see in Luang Prabang. There are not many monuments in the city – several Buddhist temples and a museum. However, we were told that the best way to feel the atmosphere of this place is to have a stroll along the Mekong river and get lost in the narrow streets at the riverside. That’s what we did. 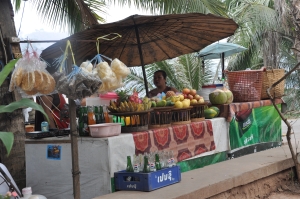 The first thing we noticed was that Luang Prabang was much more quiet than other cities we knew in Southeast Asia – because of UNESCO regulations the trucks are banned within the old town. It made the impression that the town is frozen in time, yet it was full of life: people lived their normal life without noticing the tourists passing by. Above all, the were no annoying tuk-tuk s stopping, ringing at you, and asking if you need a ride. What a relief after staying in Chiang Mai. We read the Lao people are more lazy than Thais and you actually you have to force them to help you. 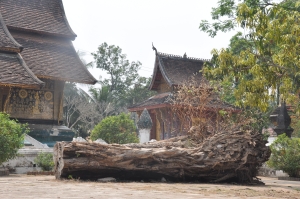 The impression of being lost in time was amplified by the colonial architecture of the small houses with large balconies. On the balconies there was a plenty of flowers which made the streets colorful in contrast to gray streets of Bangkok, Chiang Mai or Krabi. Each street was different – the architecture of the houses, the flower compositions and people made each of them unique. In between the streets there were tens of gold-decorated temples inhabited by orange-robed monks who vastly enriched the picture. Gradually, we started to be enchanted by the atmosphere of Luang Prabang and if not lack of time we could stay there a week just exploring the small streets, temples, pubs or simply looking at the river. 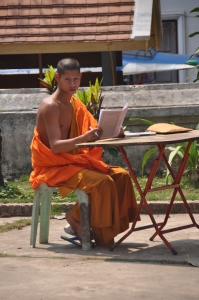 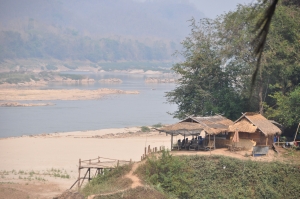 On the other side of the river, there were several temples and a village. You could get there by means of a 100 m long bamboo bridge raising about 12 m above the water. The bridge did not look very stable and started shaking when we walked across, but we got safe to the other end. 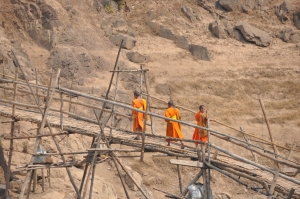 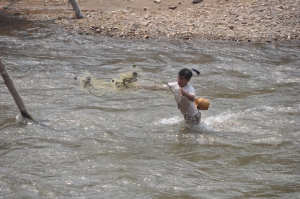 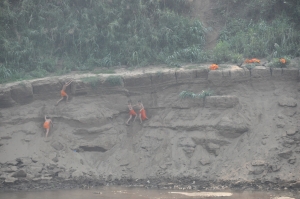 novices swimming in the river

The speciality of the village was paper and silk weaving. Both were still manufactured by hand and we could watch the process even breeding the silk worms. We were especially amazed with women patiently weaving fabrics with intricate patterns from silk threads. We spent about an hour watching the hand-made materials in an adjacent shop. 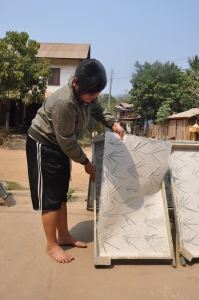 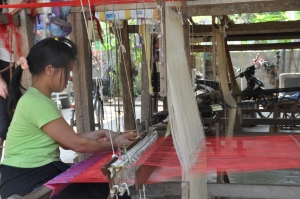 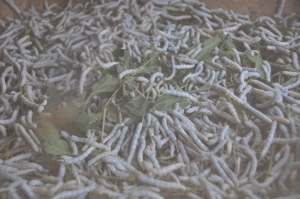 At the end of the day we decided to take a romantic trip on Mekong river. Just before the sunset we hired a small boat only for ourselves. We enjoyed it very much: the slow flow of the river, people working on the river banks, monks having a bath, fishermen pulling out the nets, the sun sinking behind the hills whose light filtered by the dust tinted everything in red, but above all we enjoyed being there together… 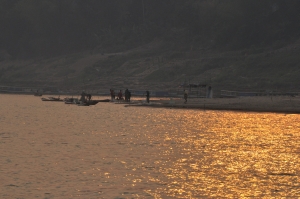 When we were back on a solid ground it was already dark. We walked back towards our guest house stopping at night market. The assortiments included mainly local products, many of which were hand-made: silk, t-shirts, funny slippers. We even foun (and tried) various spirits sold in bottles with real cobras and scorpions. There was also a food departmemt where we ate delicious papaya salad and grilled chicken. We wished we could stay there longer, but we had to get early enough to our tent to get some sleep before another exciting day…