Soloing is the purest form of climbing – no rope, no harness, no quickdraws, no bolts, no grades, no partner. Just you and the rock. There are no limits, nothing to constrain your moves. You can climb whereever you want and you choose freely the route you climb. It is like doing the first ascent everytime – you feel like no one was there before. 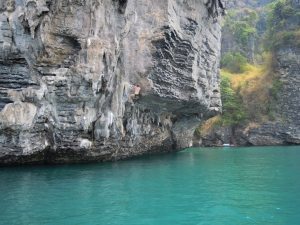 It is exactly what deep water solo is – climbing solo without any other equipment than your shoes on the rocks emerging directly from water. When you fall you get wet, but otherwise you are safe. Some time ago I saw David Lama deep water soloing on breathtaking rocks in Thailand. Since then I dreamt that someday I could try it. 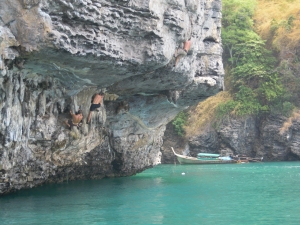 When we decided to travel around Thailand I knew that I would like to do deep water solo (DWS). It can be quite difficult to organize it on your own: you have to rent a boat and hire a boatman, you have to know where to go and when the high tide is. Therefore when we arrived at Ton Sai we booked a DWS trip offered by one of the climbing schools there, which included the boat, a guide, climbing shoes (if you dont want to put yours in a salty water) and lunch. Since there were not enough people for the trip, we had to wait 2 days, but it was worth it. 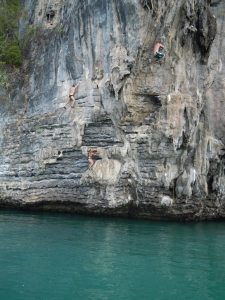 On the day, we got on the boat with 7 other people, many of which were still beginners. Everyone was very excited. First, we went to an rocky island close to Ton Sai, cliffs of which were suitable for climbing. The cliff we were supposed to climb on featured routes both for beginners and advanced climbers (5-8a in French scale). We could choose a spot we wanted to start from and a kayak would transfer us between the boat and the spot. The first guy decided to give a try to the easiest route. He got on the kayak, to the rock, up the wall, and very quickly he was on a shelf about 8m from the sea level. He did not stop there, though. He traversed the shelf, climbed up a small stalaktite and then on a slightly overhanging route to a small cave. It was a very good climb, but now he needs to get down – and the only way is to jump from a height of about 20 m. He hesitates and then does it, as he jumps he turns a little to the back and makes a large splash when he hits the water, but he is ok. Nice beginning!

Maja and me decide to go to the easy climb together. I get out of the kayak, climb up a ladder on a shelf, take some chalk stored in a small cavity in the rock to dry my hands and go up. At first I am a little shaky, although I am just above the sea level (it is high tide) and the climb is easy. I see Maja climbing up on the rock and following me. After some moves I start feeling more comfortable, but I am still more cautious than while climbing with a rope. Finally, I get on top of the shell and Maja joins me right after. So far so good. I looked down and I see an abyss just below me. The sea level seems so far from here, much further than it looked like while we were safely sitting on the boat. It is frightening, but it is the only way to get down. Maja jumps first, she falls in the water straight, and soon her head appears on the surface. I am much relieved. Now my turn. I always liked climbing up and never thought much about getting down. When you have a rope it is straightforward, just repell down. But now… Ok, I jump and after a short moment I climb back on the boat.

That was all right, but the jump was intended. What if you simply fall of the wall when you climb. To try it out I choose more difficult route starting under a roof. First I traverse a to the left around a stalaktite to avoid climbing the roof. Then I try to get over the roof, but I lost a lot of energy already and dont dare to do it. I jump off the wall and I am in water again. Next try – I climb the ladder directly from the water. I am all wet, so I use some chalk, but there is little left. Nevermind. It is for fun only. I manage to do the traverse much quicker and I almost manage to climb over the roof. It looks much easier there; layered rock makes for good holds and step. However, when I try to push myself up, my wet hand slips out of a very convenient pocket. I fall, but I enter the water ok and the height was not so large either. After all I am an expert at spectacular falls.

When I am back on the boat, we go together with Maja to the other route again. When Maja climbs up
to the shelf I try a traverse which ends in a small cavity. The height is about 10m and I jump safely into the water. By the time Maja has reached the shelf and she is in the boat again.

Although Maja is not usually very enthuisiastic about climbing, she wants to try the traverse as well. She does very well, but at first she chooses the hard way and has to retreat back into water. Her second try is better – she gets on top of a small stalaktite, but because of height does not dare to climb further. Not too bad for someone who is affraid of heights. 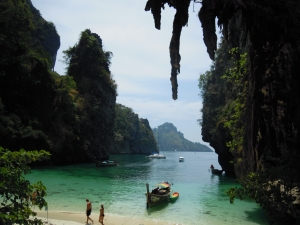 After the emotions, we take a break on the nearby beach and have a lunch. Meantime the guides demonstrate their skills on some boulders. They are really good (I can hardly make two moves on the same routes) and they climb barefoot.

Our next destination is another cliff. This one has a very steep overhang and the beginning which ends up at about 10m above sealevel. No go for such a sissy like me. Fortunately, there is an easier entrance to the right featuring smaller overhang and a smooth silghtly reclining wall. On the other side, there is an enormous stalaktite from the to of the roof almost reaching the water. In total about 8m high. It looks familiar though. Our guide tells us that it is the spot where David Lama did his famous water solo. The movie I saw back home showed exactly this climb and now I am here and I am going to try it myself. Very cool! 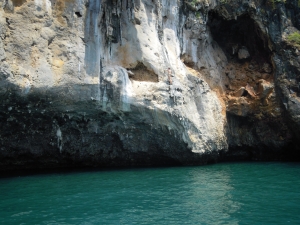 I decide to climb first the right route. The start is hard, but then it gets a little easier. When I am about 5m above sea the problem starts – the rocks is very slippery, I already ran out of chalk (imagine that the heat reaches 35 C), the steps and holds are very small and in case I fall I will probably scratch against the wall. I feef very nervous, I start shaking, the guide advices me to go to the left. But how, I fear that when I move I will slide down. I try to calm down, I take a deep breath and move a little my feet. Now, I can reach a nice pocket from where it is only easier. After some 7 more meters I am in a large cave. I can climb further, but I hesitate few minutes am then jump.

The second route up the stalagmite is easier. The most difficult is getting up the ladder and then jumping from about 18m. It costs me a lot of courage, but when I am back in water I am happy I did it. Of course, I did not climb as high as David Lama, but still this is something to tell about back home.

Maja got really excited about deep water solo and she even lost her height fear. While all other girls on the boat were disappointed because the routes in the second round were too difficult for them, Maja fought very hard she was the only girl who managed up to climb the routes. Everyone was cheering up for her, when she climbed both the right route and the up the stalagmite. Both routes were more difficult than what she usually climbs, but I suppose the warm ncouragement by the handsome Thai guides worked better than my patient instructions. 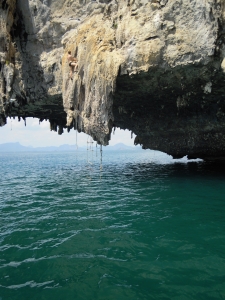 After everyone is exhausted, the boatman starts the engine and we swim back to our beach.

Overall, deep water solo is very exciting adventure and I would recommend it to everyone climber and non-climber. Once again I learnt that the limits of our capabilities are not in our physical traits but in our minds. When you finally learn how to challenge your fears and free your mind, deep water soloing makes you feel free.