Thailand has been already over 50 years a popular turist destination. Farangs (Thai for tourists) from all over the world travel to Thailand to enjoy beautiful beaches, delicious cousine, low prices and Thai women. Thai economy wins a lot from this touristic bussiness and the Thai people came to perfection of offerring the visitors what they are looking for. To such a degree that one can even have the feeling of being in a artificially created world, such as the one descried in Orwells 1984. This is exactly what we felt when we got off a tuk-tuk in an unfamiliar place somewhere in the middle of Bangkok to great disappointment of our tuk-tuk driver. But let us start the story from the beginning…

Since we had still some time left in Bangkok we decided to go to National Museum. On our way to the museum we were stopped by tuk-tuk drivers, taxi drivers and touts, who offered us quick transport. After two days spent in Bangkok we were already confident enough with Bangkok public transportayion system so we rejected all of the offers. While saying polite no, thank you and goodbye (in Thai and english) to all of the drivers I did notice a woman walking in front of me and I nearly walked into her. She did not mind much, simply turned around and smilled. She was normal middle-age Thai woman. Her english proved out to be very good and she started conversation with us. She asked for our destination and informed us that National Museum is closed for a lunch break until 2pm. Instead, she recommended us visiting Buddhist highlights: Lucky Buudha, Tall Buddha and Golden Mountain. Then she added thst we were lucky because due to Buddhist holiday all of the hallmarks are open to visitors free of charge. More than that – we could even take a tuk-tuk for a round tour around to allof the highlights for only 20 b. 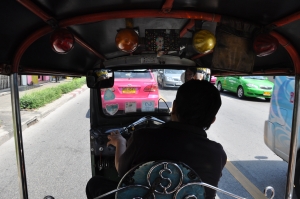 It all sounded too good – tuk-tuks are considered expensive and unreliable and locals take them only if really in need. To give us more confidence, the nice woman equiped us with several phrases in Thai (sa-wat-dee=hello, shi-shi=slow) which would help us to communicate with the driver. Suddenly, out of nothing she finds a tuk-tuk whose driver is more than willing to take us for the tour for 20B. The driver is extremely nice and surprisingly speaks some English (Thai people try really hard to tell at least few phrases in english to the foreigners). 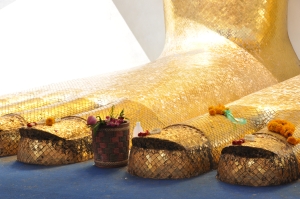 First, he takes us to the 20-meter-high Buddha. We take 20 min to see it, but after we come back our driver is still waiting for us. The next stop is TAT (turist information center) which can give us information about travelling afound Thailand. At the center a very friendly officer gives us numerous recommendations of interesting places to visit and even prepares a detailed day-by-day schedule of our trip. Finally he makes us an offer – a holiday package which includes all of the attractions he recommended plus accommodation plus flights; everyting at very low price. We consider the offer very seriously, but after all we are on our first backpacking holiday and we want to plan everything our way. Nevertheless, we ask the officer about accomodation options for an independent travel and he quotes a price of 1200 baht per night. Wow, that is really high, definitely not for a backpacker’s budget.

After we reject the offer the officer is somewhat less talkative, so we come back to our tuk-tuk. We find our driver in not such a good mood as well…

The next stop is lucky buddha – rather badly-kept Wat houses the oldest buddha image in bangkok and buddhas footprint. The keeper of the place tells us why tuk-tuks are so cheap today: there is a special promotion today and thr government pays the fuel. Moreover fabric factories can be visited for free. When we are back in our tuk-tuk the driver tells us that he needs special cupones to buy fuel and he will get them only if he takes us to a tailor.OK. Lets go. The tailor shows as a catalogue of suits and dresses, but we dont find anything in backpackers style. We leave. Our driver is apparently very unhappy and when we ask him to get us to the next spot he stops the vehicle and starts his story about coupons again. That’s enough. We get off the taxi and pay the driver 60B. It’a not much, but more than originally agreed on. We have no idea where we are, but at least we have still a few hours to catch our train to Trang.

I don’t know exactly when we started to be suspicious about the “special promotion” story. It started off quite strange, but everything seemed so perfect: a nice Thai woman stopping for a chat, a friendly english-speaking tuk-tuk driver, interesting buddhist highlights with few foreign visitors, helpful tourist information center. Isn’t it a dream of every backpacker or an ordinary tourist? Yes, it’s, but there were many lies as well: National Museum was not closed for lunchtime, there was no promotion day, Lucky Buddha was not a hidden treasure, but an ordinary image of Buddha found in many temples. The most confusing thing about the story was that all lies were made perfectly likely and they were accompanied by a good dose of true (and new to us)information. Suddenly, we felt like on the stage where everyone else is an actor following the script, but we were not told that it was only a play. Have you seen Trumpt Show? It was exactly like this: an ultimate reality show produced just for you without you realizing anything.

If that is what you are looking for Thailand can offer it to you as well.